If it was your last cigarette, you've likely had more than one.

I had my last cigarette at 7:15 in the morning to get dopamine after 8 hours without nicotine, nothing more. It was my plan to save one for the morning of my quit for that specific reason. (but I didn't buy the patch ahead of time or rush to the store for them as soon as I smoked  my last cigarette)

I had planned to use the patch because quite simply, I had not studied nor learned anything outside myself about smoking before I quit.

What I did learn before I quit was I didn't need to smoke just because I thought I did.

I learned this by simply thinking before I smoked in the 4 weeks before I quit.

I simply told myself to wait a little longer when I wanted to smoke. That's it. I didn't count. I didn't get stressed out. I didn't set a quit date until I was at the counter KNOWING I was buying my last pack.

Do you remember your last cigarette?
When and Where did you have it?
What did it mean to you?
Was it a bigger deal than your decision to quit?
If so, How many last cigarettes have you had?

If you've had more than one last cigarette, had you really decided or were you just hoping it would happen again?

Here's something that may help change your focus.

If you are on the road to freedom you are willing to allow the time it takes to unlearn your old ways.

If you are simply fighting to not smoke you've focused on smoking (or not smoking), and freedom may elude you.

You never know with anesthesia whether you'll be coming back.

But you can be sure smoking is doing damage.

Yes, I have another treatment for diseased tissue in my esophagus.

Did you know that smoking weakens the valve at the bottom of your esophagus leading into your stomach which can lead to GERD/acid reflux?

When you quit smoking, be aware of heartburn or waking up with stomach acid in your mouth at night. Get treatment immediately. Don't put it off.

Never lie down less than 3 hours after you've eaten. If you have reflux, one potato chip, one chocolate kiss or one cookie will signal your stomach to fill with acid which can back up into and burn your esophagus.

I was ok with the claustrophobia part and the noise, especially after she told me if I wanted anything to relax me, I would have to reshedule the request with my doctor and we drove 45 miles to get there.

Laying there 90 minutes in the same position with no sense of time and wondering when they were coming in to inject the contrast die. The blood had drained from every point that touched the table and my arms had been above my head and unable to adjust off those pressure points.

smoking did affect our metabolism and in order to counteract the change when you quit you need to lower your caloric intake by 150-200 calories per day.

A good way to keep up your energy level is to eat 6-8 small meals per day.

An orange and a piece of cheese

A banana and two bites of chicken or other protein.

The fruit (orange, banana, strawberries, watermelon, frozen grapes) raises your blood sugar and energy level while the protein holds it there..

Sparkpeople has good exercise videos for all stages of ability even, physically disabled.

I have the solution that works

I  suggest you do this at home and not as someone's guest. :-)

We had it at my cousin in laws Mexican restaurant. They are closed on Sundays so they did it special for him.

The choice moment came near the beginning when my dad stood up to welcome everyone and thank them  for being there.

his opening line was  "Welcome to my pre-memorial service." Everyone just about fell off their chairs.

I didn't see one person get up to go smoke the entire time but, I met many who have lost husbands, fathers and mothers to smoking.

Some things are instinctual. Quitting smoking is not one of them.

I've watched the DC Eagles from shortly after they hatched and it is amazing to see their daily progression.
They would sit on their butts before their tail feathers came in.
When their tail feathers came in, they no longer sat on their butts.
They were born exactly 2 days apart and they flew from the nest for the first time exactly two days apart.
Neither of them knows how to hunt yet so they are still dependent on their parents.

Sometimes it's just difficult to get things accomplished and when everyone's ideas have be considered, you wonder if the goal will ever be accomplished.

Last Sunday, my stepmom asked me if we (my two brothers and myself) would sing at the party tomorrow. I told her she should discuss it with my younger brother because he always tends to be disagreeable when it comes to these things.

I wanted to collaborate on an original song expressing our greatfulness for my dads wonderful character and the values he passed down to the three of us. My younger brother wasn't interested. as expected

Time passed and I suggested we do some Kingston Trio songs because we had played them together back when we first started singing together.

I emailed my twin and told him about our stepmom's request and mentioned the kingston trio songs. He said he hadn't sung those songs in decades (like I have?)

So we discussed some other songs and decided on 3 and I spent hours making up song sheets so everyone at the party could sing along then my younger brother says he doesn't want to rehearse and my twin won't do it without a rehearsal.

Now what I don't understand is why it was going to be such a big deal to sing in front of family and friends. What difference would it make if someone made a mistake?

So, I told them they didn't need to play and they could just sing along with the rest of us and I would do the playing.

The moral of the story is, you can't depend on anyone but yourself.

You make it happen. It's your quit.

I will play without fear because that's what I do.

and a Happy Birthday Dad.

There was a story Nancy pointed out to me on skype last night about someone falling into one of these hot Springs.

This story might apply to a new quit with a coinciding vacation to Yellowstone. :-)

So, some tips for you from someone with a long quit and a clear head.

Have you heard it said that the first month of a quit is a rollercoaster? It is.

So, how do you stay on track when you get a craving.

YOU PLAN AHEAD AND YOU STAY AWARE!

Tip #1 Skydiving to enter the park is probably not the best way in for the new quitter. You might pull on the control line a smidgeon too hard and drop into this. 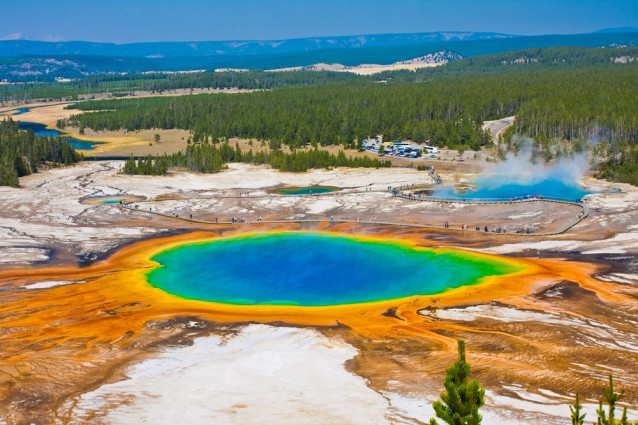 Yes, many people may look for you. Will you be found wearing your patch or will it have come off?

Tip #2   Another danger if you've had insomnia the night before may be confusion and you may try to wash your hair in too strong a stream of water like this. Heads on rocks will not do well as your "shower of power" sweeps you downstream.

Tip #3 If you do make it and manage to dry out, you may want to avoid the maul for awhile.

Tip #4 While you are leaving the maul, don't get run over going to the pawking lot by these guys.

If you follow the above directions, you will come back here on Monday still SMOKE FREE!

Quitting doesn't have to be torture.

My 3rd day, I realized not smoking could be a decision. Just realizing that concept made me laugh.

Because I caught it before it caught me.

From that point forward I laughed when I had the urge to smoke.

After my first week, I was thinking of laughing rather than smoking.

Also, when you get a crave, if you can imagine stepping outside yourself and be an observer and you will not get caught up in it.

And this is HARD

And, This is HARD

Your mind is an incredible thing
Why limit it to settling for smoking
50 some years ago when I first started writing music
it was sometimes a struggle to find just the right word.
Often, I would be 99% satisfied but when I would sing it through, there would be one word that just wouldn't roll off the tongue easily and oddly it wasn't meter or flow, it was the meaning and knowing there was a better word for that feeling.
I would often be doing a mundane task like taking out the trash a week or two later and it would come to me.
Did it come out of thin air. I don't believe it did.
I've decided my subconscious mind had been rolling on it in the background until it found the word. I've come to understand that everything we do in our daily lives is recorded up there. It may not be recallable but if it happened, it's up there, so, just imagine all the connections to smoking rolling around up there.
Most of my music comes from an emotion that strikes me to put that feeling into what I call a seed idea.
About 10 years after I started writing, I was semi awakened in the middle of the night by thunder. A short while later, I woke and had a completed set of lyrics This was the first time it had happened and I wrote them down. When I awoke, the melody and music were done without ever singing a note or picking up a guitar.
The year I quit smoking, I was inspired one night before I went to bed and 6 hours later a completed song awakened with me.
Now, I do my songwriting in my sleep.
Occasionally when I sing a new song through, there's that one missing word.'
Your subconscious mind can do amazing things asleep or awake.
Smoking is a decision, a conscious decision but it's been tied to your existence through repetition. You can undecide your smoking lifestyle and be free.
Yes, nicotine keeps you coming back while you use it but honestly, you can unlearn it to the point of insignificant consideration.
Let's get you there.
Here's a link to that first song I wrote in my sleep.
https://youtu.be/-hNRuKgW4cY

there are a couple of good free sites.

Sparkpeople is a healthy eating and exercise community much like this one and has exercise videos for all levels including disabled.

Myfitnesspal is similar but I believe also lets you upload daily info from your fitbit if you have one.