Happened upon this today while searching the effects of nicotine. It gives more in-depth information than the EX Plan does.  Below is a sample of the material in this link:  http://science.howstuffworks.com/nicotine.htm

by Maria Trimarchi and Ann Meeker-O'Connell

Ever wonder why smokers crave a cigarette when they're in a bad mood or in a stressful situation? It's because nicotine may help people feel calmer, causing temporary feelings of relaxation as well as reducing stress, anxiety and even pain [source: World Health Organization].

In spite of that relaxation, though, nicotine actually increases physical stress; its effects are considered a bit of a paradox. It perks up the central nervous system, but depending on the dosage some smokers find nicotine also acts as a sedative. Some studies, though, suggest it may just be the ritual of smoking that induces a calming effect, because nicotine is actually considered a stimulant, not a depressant.

Nicotine in the Body

Just 10 seconds after a cigarette smoker inhales, nicotine is absorbed through the skin and the mucosal linings in the nose, mouth and lungs, and travels through the bloodstream to the brain. It stimulates adrenal glands to produce epinephrine, a hormone and neurotransmitter you also know as adrenaline. This increases heart rate and blood pressure while constricting blood vessels; it also stimulates the production of dopamine, a neurotransmitter that controls the brain's pleasure center. Inhaling nicotine gives the most immediate effects, and that's not a coincidence; it's because your lungs are lined with millions of tiny air sacs called alveoli. Alveoli provide an enormous surface area -- more than 40 times the surface area of your skin -- making it the most efficient way to get nicotine into the bloodstream [source: Richardson]. Nicotine only stays in the human body for a few hours; it has a half-life of about an hour or two, meaning that six hours after smoking a cigarette, only about 0.031 milligram of the 1 milligram of nicotine you inhaled remains [source: Hukkanen, Benowitz].

Nicotine can also be absorbed through your gastrointestinal tract and your skin -- this is how smokeless tobacco products such as chewing tobacco, skin patches and gum deliver their nicotine fix.

.... Nicotine also increases the level of other neurotransmitters and chemicals that modulate how your brain works. For example, your brain makes more endorphins in response to nicotine. Endorphins are small proteins that are often called the body's natural painkiller. It turns out that the chemical structure of endorphins is very similar to that of heavy-duty synthetic painkillers like morphine. Endorphins can lead to feelings of euphoria, and may explain nicotine's psychoactive and rewarding effects.

.... You don't need to inhale nicotine to become addicted. Smokeless tobacco products are also addictive; an average-sized dip resting between your cheek and lip for about 30 minutes will give you the same nicotine fix as if you smoked three cigarettes [source: BeTobaccoFree.gov].

Just watch this for a few minutes 'til that craving passes.  Then watch it again.   (They're on pointe!!!!)  Jaw Dropping! 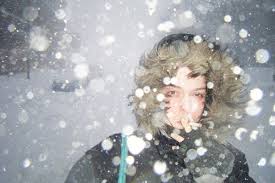 Smokers in the snow

I sit beside a window in the hospital library, down a hallway from the main desk, among the back issues of medical journals, bound and unbound, on rows of shelves. The only sound is the radiator by my feet blowing warm air up at me. This is one of my favourite places to read. Here at the margins of the clinical world, away from patients and sickness, the atmosphere is more orderly, scholarly, rational. In the books and journals on the shelves behind me, illnesses are broken down into symptoms and pathology, and patients are merged into statistics. I like to take a break here once in a while, protected by walls of evidence and certainty that resist the randomness of real medicine.

Outside the library window, it’s a monochromatic February morning. Snow fell last night, and a tractor roars as it clears the sidewalk, loudly enough for the sound to penetrate into the library. Instead of reading the journal article lying open in my lap, as I had told myself I must, I am playing at being a scientist carrying on my own research project, watching the smokers outside and making observations about the process of “going for a smoke.” Smoking is not permitted on hospital grounds, so everyone walks to the sidewalk where hospital property ends and the rules don’t apply anymore. I know this is why they do it, but I try to imagine that I’m a researcher studying an unfamiliar culture. I think it would be puzzling to see people trudging back and forth, one after the other. After all, there’s nothing about the sidewalk that’s particularly suited to smoking. Maybe I would conclude it was some kind of ritual. Maybe it is.

After watching for fifteen minutes, I’ve decided that “going for a smoke” represents a discrete task, whereas other activities such as “walking down the street” are components of larger, more complex processes. There’s a pattern. Smokers emerge from the entrance to the hospital, cross the parking lot, and walk up the path to the sidewalk on the west side of the street. Some wait to reach the sidewalk before they light up, but others are impatient and don’t quite make it to the legal zone. It takes less than five minutes to smoke a cigarette. Then, they retrace their steps and disappear back into the hospital. The smokers come out singly, in pairs or, rarely, in larger groups. Many carry cups from the coffee shop in the lobby. Some set the cups down on one of the two garbage cans while they use both hands to light up. I can’t see anything different about the two cans, but the one to the right of the pathway is more popular than the other to the left. Even though I have no clue why this would be, I’m pleased with myself for noticing; it seems like the kind of observation a real researcher would make.

At one point, three men come out of the hospital, cross the road and duck into a bus shelter. Five minutes later, they come out and go back into the hospital. The careful anthropological detachment I’ve been practising falters, and I feel annoyed. Damn smokers. Now that bus shelter will smell of second-hand smoke. I’m surprised more of them aren’t smoking in there, but maybe they do, when the weather is worse.

There’s always at least one person smoking in front of the building, and five is the average. Some chat, others stand alone and smoke with determination. Patients, employees, family members: Who can tell? They look chilly, their hastily donned coats and bare hands in stark contrast with the warm gloves, hats and scarves of the pedestrians who are also using the sidewalk. Occasionally a smoker moves out of the way to allow a pedestrian past, but they never look at each other.

The smokers drop their cigarette butts and ashes on the snow, ignoring the receptacle located nearby.

I decide that if I were ever going to write up my observations, I’d take an unconventional approach. I’d claim that while medical narratives about smoking usually invoke concepts of addiction, self-destructiveness and harm, smoking beside a hospital could alternatively be seen as an act of defiance against the institution. It contradicts the dominant narrative of the hospital as a place of “healthy” activities, and of the smokers as participants in the “health” industry, whether as workers or patient. I could write a really thought-provoking theoretical piece arguing that smoking on the sidewalk resists oppression inherent within both the institutional policies and the value-laden efforts at “health promotion” that these policies collude with.

Then again, I wonder what reasons the smokers would give. Maybe they would just say they wanted a smoke. They’re under stress, I’m sure, all of them. Someone they love is upstairs dying. They just worked a double shift, or got yelled at by their supervisor. Lots of reasons not to quit today.

I look at my watch. It’s time for me to go back to work, with real people that I have to interact with and can’t just observe. But I sit for one moment longer, watching as a woman in a grey coat, about my age, lights up one last cigarette. And I think, all the real action takes place at “the boundary,” doesn’t it? There are the smokers, crossing the line to where smoking is no longer prohibited. And here I am watching from the other side of the boundary keeps me apart from them, the glass that locks the outside out. Even when I’m not pretending to be a researcher, I still put a comfortable distance between them out there in the cold, and myself in my warm hospital. The divide that separates me, a physician and a nonsmoker, from the people who do that sort of thing; go for a smoke in the snow.

Are you DABBLING WITH YOUR QUIT?
Are you a fly-by quitter?
Are you one of those “oh I know I should quit, I’ll check out this site...”
Are you one of those who ran out of money and can’t afford your next roll-em-up fix?
Are you one of those who is sick and has decided to quit ‘cause you don’t really want one now and this is the perfect time?
Are you a special celebration quitter?  You know, New Year’s or anniversary or husband/wife’s  birthday or, some special moment that is the “now” for your “moment to quit?”
Have you had a loss of a friend of family member that has jolted you to seek out methods of quitting?

Have you quit numerous times and this is just another attempt because you know it’s slowly killing you?
NEWSFLASH - you can’t be a fly-by quitter.  You have to land, plant yourself and grow roots into the quitting process soil.  That means study, practice and perseverance.  It means certain sacrifices, attention, and steadfastness.
If you joined this site - one can assume you want to quit.   Well, or know you should.   All the tools are here for you.  Truly.  ALL of them.  Except the one that makes or breaks a quit.  YOU.
If you think some nicotine replacement therapy (a patch, the gum, Chantix...)  is going to do it for you - think again.  Wish we could just suck on some magic potion that would free us from this addiction, but thus far that elixir  has not been created.  YOU actually have to do some of the work.
The question you have to ask yourself is: “how much am I willing to give of myself to attain this goal of freedom?”  We in this community will walk the walk with you, but if you aren’t willing to dedicate 100% of yourself to this task - you simply won’t make it.  ‘Cause THAT’s what it takes.  Ask any long-term quitter on here.  Ask any short term quitter who has gone beyond their previous quit attempts.  They will all say, yes, it takes 100% of you.
So if you’re dabbling - don’t bother.  You won’t make it.   You’ve got to commit to your quit.  You’ve got to sink your roots into the quit soil.
I’ve grown my quit plant for over  8 years.  It’s sturdy and bushy and filled out.  And it flowers every March 1st.   How strong is your commitment?  How long are your roots?  How grand is your plant?  What are you doing to feed it?